This week’s Music Mondays concert was moved to the Asbury Park Train Station, due to the threat of storms. But that didn’t dampen the mood of the crowd who enjoyed opening performances by Asbury’s Got Talent Winners, 20 year-old Nicholas Bloom/NGXB Music who wowed the crowd with an outstanding rendition of Guns N’ Roses’ “Sweet Child O’ Mine” and 18 year-old Promise Robinson from the Hip Hop  Institute who performed original music and who will be having an album release party at APMF this Thursday.  Des and the Swagmatics got the crowd dancing, singing and throwing around beach balls during the main set. Special thanks to Jason from Asbury Audio for convincing us during the sunny, blue sky portion of the day to move the show out of the park and into the train station and kept us all safe.  Don’t forget to join us on Monday, July 29 in Springwood Park when the New Jersey State Youth Orchestra opens for Al Covington and Nu’Eara Band. 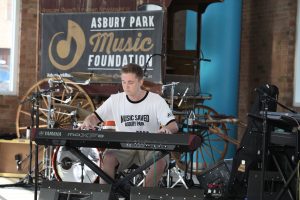