The famous Asbury Park Concert Band concluded it 74th season with an enthusiastic crowd under a beautiful summer night sky. The free shows were held on the Asbury Park Boardwalk at 5th Avenue near Convention Hall. And when it rained, which it did, the Band moved to the Casino where the acoustics only enhanced the musical experience!  The band played programs with different themes including Broadway, patriotic, and big band jazz music. Another feature of the band is the special Children’s Concerts performed throughout the summer where talented students play with the band for part of the concert. The crowd at each show always grew as the night went on with boardwalk strollers stopping to enjoy a song or two. The last show included a “Salute to the Armed Forces” where conductor John Luckenbill asked audience members of  the different service branches to stand up during their anthem – a very touching end to a beautiful season. A big thanks to our sponsors, Investors Bank Foundation, Robinson’s Ale House and the American Federation of Musicians and to Madison Marquette for providing seating on the boardwalk. We can’t wait to for the Band’s 75th season! 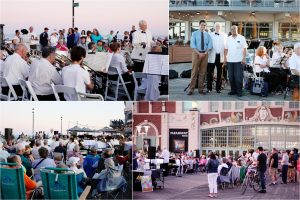