APMF Congratulates Tom Donovan on his Retirement from Gannett

The Asbury Park Music Foundation Board and the entire Asbury Park community are wishing the best to Tom Donovan, publisher of the Asbury Park Press, as he retired earlier this week after 32 years in the newspaper industry.

Tom was named publisher of the Press in 2007 and saw the publication through Superstorm Sandy and the challenges of digital growth.  Under his leadership, the publication was a finalist for the Pulitzer Prize’s public service award and won the National Headliner Award in 2010.  He plans to spend more time with his family before deciding what to do next.

Tom has been a stalwart community supporter, serving on the APMF Board of Trustees since its inception in 2011. As a Board member, he has raised close to a million dollars in grants for youth music education in the Asbury Park area. He helped to launch and grow the Asbury Park Music + Film Festival. He not only lends his financial support, but he is present and active at many events, standing together with the community he tirelessly serves.

As a token of gratitude for years of contributions to the Music Foundation through APP sponsorship, the Board members of the APMF presented Tom with an acoustic guitar, a symbol of the bond that will always connect him to Asbury Park.  We’re sure he won’t stay idle too long during his retirement and we wish him well as he spends time with his family, his friends and his guitar. We look forward to his continued support as an APMF Board member and the APM+FF Board Co-Chair. 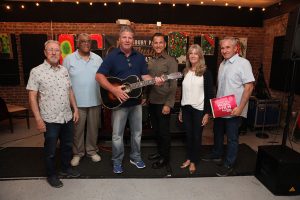