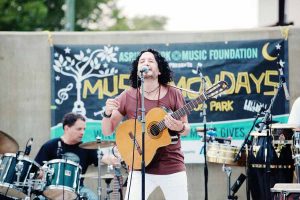 A preview of the summer series will be included in the special “Sounds of St. Johns” fundraising event on Sunday, June 10 with performances from Chris Brown and the Asbury Park Concert Band. Details are available at Facebook.com/events/204251090391526/.

This free concert series takes place at the Springwood Avenue Park located between Atkins and Union Avenues every Monday from June 25th through August 28th (final show is a Tuesday). The headline performers include local favorites Ray, Goodman & Brown, The Soul Cruisers and many others. Supporting acts all have roots in the Asbury Park community. Last year’s series attracted over 4,000 attendees for 10 weekly shows and this year’s lineup is sure to surpass those numbers.

The newly renovated Kula Café located adjacent to Springwood Park will be open for dinner and take out service on Monday nights throughout the concert series with patio seating available.

Shows begin at 6pm and free street parking is available. The park is a short walk from the train station or downtown. Asbury Park Complete Streets Coalition will provide a free bicycle valet service.  Bring your lawn chairs and blankets. In the event of rain, shows will move to the Asbury Park train station (announced on the APMF Facebook page).

Wednesdays will be filled with live music on the Asbury Park Boardwalk at the First Avenue Green located next to MOGO Korean Fusion Tacos and Watermark. The series features fan favorites along with emerging bands. Each show opens with a youth band from Lakehouse Music Academy, many of which feature scholarship students supported by the Asbury Park Music Foundation.

There is also a special benefit show in advance of the summer series on June 14 at the APMF space on 621 Lake Avenue. This show features Sonic Blume, Yawn Mower, Sentient Moss and Not UR Baby. Funds raised will be added to donation to the youth programs. Details at Facebook.com/events/444547882655766/.

The famous Asbury Park Concert Band will entertain visitors for its 73rd season with musicians from the entire state participating. Each show is themed, including Broadway, patriotic, and big band jazz music. Another feature of the band is the special Children’s Concerts performed throughout the summer where talented students play with the band for part of the concert. Special seating on the Boardwalk is provided courtesy of Madison Marquette.

These free shows are held on the Asbury Park Boardwalk in front of Robinson Ale House. This series is sponsored by Investors Foundation, Robinson Ale House and the American Federation of Musicians Performance Trust Fund and donations from community members.